My family has never been a football family. I don't know the difference between a touch down, field goal, or any of the other stuff. BUT, as far back as I can remember, my mom always had us tuned in to watch the Rose Parade.  This year I am excited to be part of Dole Packaged Foods ‘Live on Green’ Food Blogger Blast Party 2016 Rose Parade led by Dole California Cook-Off Champion Ally Phillips of Ally’s Kitchen. 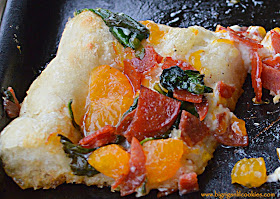 December 29th and 30th, Ally will perform live cooking demonstrations and share quick and fun recipes featuring Dole Packaged Foods’ products.
One of the recipes Ally will be making is this Spinach Mandarin Orange Pizza. This pizza was so different. Light and fresh, making it a perfect appetizer to serve for your New Year's  (or any other) party. 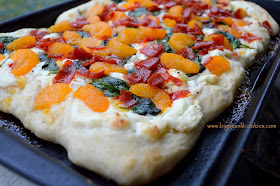 On January 1, tune in to watch the Tournament of Roses Parade where Dole Packaged Food’s float, “Soaring Over Paradise,” explores the world’s rainforests. The float includes four waterfalls, a zip line that travels through the rainforest canopy and a flock of Macaws that appear to take flight over the floral gardens.

Disclaimer:This is part of a sponsored post, but all opinions are my own.

Bake in preheated oven 17-20 minutes, or until edges are golden. Slice and serve immediately.